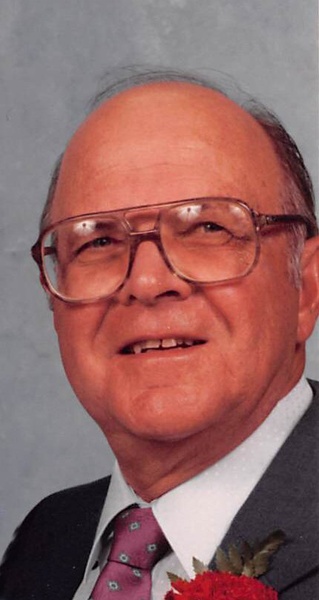 Leslie Eugene Herzog was born on June 8, 1927 in Wanamingo, MN to V.O. and Marie Herzog, following his twin brother, LeRoy, 10 minutes later.  He graduated from High School June 1945 in Paynesville, MN.  He then enlisted in the US Navy and was stationed in Guam during WWII.  Les began his banking career, working as a teller, bank examiner and V.P. of Union National Bank in Minot, ND.  He was named president of 1st State Bank in Cooperstown, ND in 1965.  In 1972, he became president of 1st State Bank of Litchfield, MN until his retirement in 1983.

Les was very active in all the communities serving on multiple boards and oversaw many fundraising events.  He enjoyed gardening, hunting and fishing, but his greatest passions were golf, his Catholic faith and his family.  He was very proud of his sons, grandchildren and great grandchildren.

He is survived by his wife of 72 years Pat; his sons Stephen (Joan) of Kalispell, MT and Thomas (Julie) of Fargo, ND; 5 grandchildren and 7 great grandchildren.

To order memorial trees or send flowers to the family in memory of Leslie Herzog, please visit our flower store.