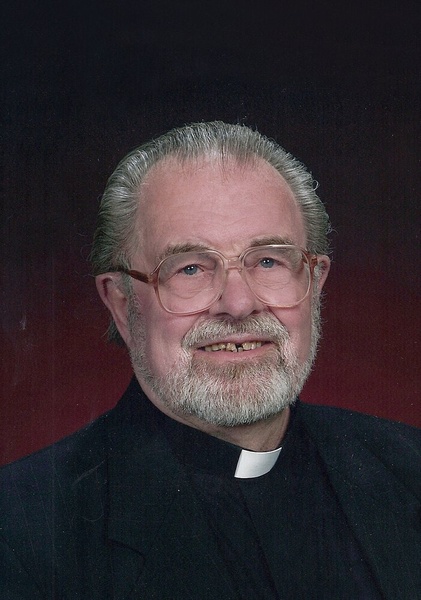 Reverend Richard C. Gross (Father Dick), died at Garden View at Hilltop on Sunday, August 7, 2022, in his sleep on his 91st birthday.

Father Dick was born in Luxemburg Township, 1.5 miles NE of Watkins on his parents’ farm.  His parents were William and Alma (Steman) Gross.  He was preceded in death by his parents, numerous uncles and aunts, his sisters Rosemary Kaufman and Elizabeth Pfannenstein, brother Harold, and brothers-in-law Earl Kaufman and Don (Marge) Pfannenstein.  He is survived by his sister Alice (Ted) Krebsbach, brother Ronald (Karen) Gross, sister-in-law Georgian (Lahr) Gross, and many nieces/nephews and grandnieces / grandnephews.

Father Dick attended St. Anthony Parochial School in Watkins and graduated from Kimball High School.  After high school, he worked as a carpenter’s helper, cheese plant employee at Watkins, a railroad company in Minneapolis where he prepared box cars for grain shipment, and as a busboy at Charlie’s Café Exceptionale.

On December 8, 1952, he was drafted into the United States Army during the Korean War.  He was sent to Japan on July 4, 1953, and attended a six-week engineer training school.  He was then re-located to northern Japan near Sapporo, Hokkaido.  He became a Military Policeman with the 545th 1st Cavalry stationed at Chitose, where he and eleven others-maintained law and order for two regiments.

Father Dick took a three-month early release to attend college at St. John’s University as an engineer student.  Following a retreat between semesters of his freshman year, he “finally” answered the call to serve God’s people as a diocesan priest.  After two years in the minor seminary at St. John’s, Father Dick entered the St. Paul Seminary.

Father Dick had many interests in life including reading, fishing, golfing, hunting, bowling, and traveling.  He went to Central and South America in 1970 and took numerous fishing trips to Canada.  He also enjoyed many vacations to Alaska with friends from 1991-2000.  During one month in both 1987 and 1990, he provided ministry for a parish in Nome, Alaska.  After retiring in 2001, he served at parishes in rural Alaska over Christmas and Easter.  He was in Barrow, Alaska, during September 11, 2001 attacks at the World Trade Center.  He also served at the parish in Coopers Landing, Alaska, during the summer months from 2001 until 2011.

Father Dick belonged to many organizations and received many awards.  His favorite was a plaque from Compassionate Friends, an organization to support families who lost young children from disease or accident, which he helped found in the early 1980’s.

Father Dick had a wide range of talents and gifts he shared with people of all ages.  He was especially known for his ministry to the dying and their families.

In lieu of flowers, memorials are preferred to the Gethsemane Chapel located in Garden View at Hilltop Nursing Home in Watkins, MN or to donors’ choice.

May he rest with the Lord.

To order memorial trees or send flowers to the family in memory of Rev. Richard C. Gross, please visit our flower store.